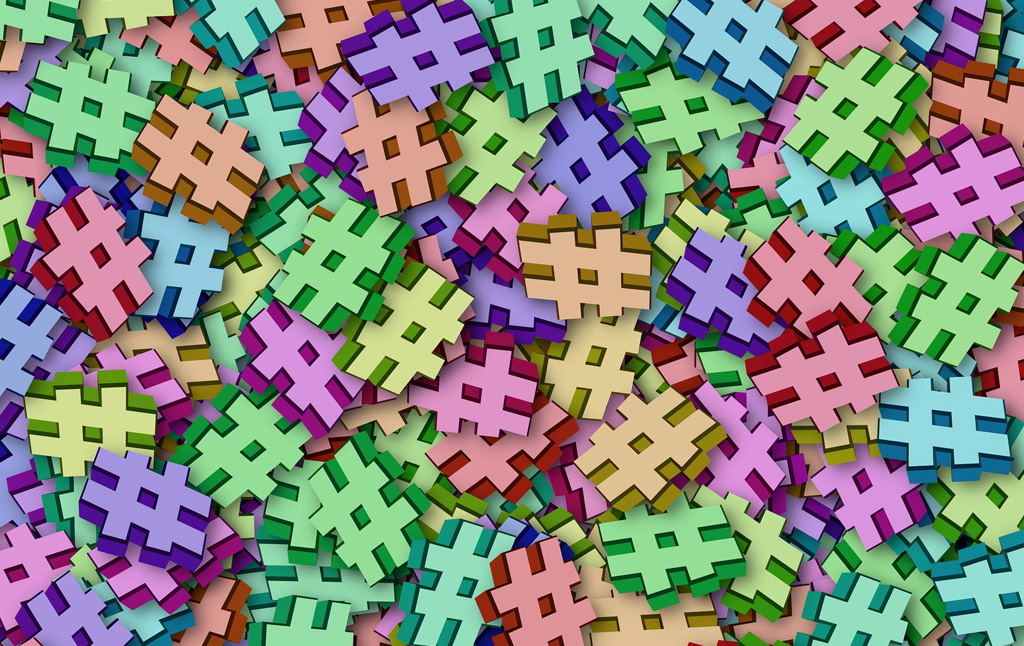 Hashtags have become common in social media, you can’t go onto any social media platform without seeing them everywhere. Hashtags cover pretty much anything, from trending topics to marketing initiatives, from categorizing posts to silly comments, hashtags have become part of our online culture. While they may be common, they can still be tricky to use effectively, especially for marketing.

KEEP YOUR PLATFORM IN MIND

Not every hashtag is going to work on every social media outlet. A tag can do amazingly well on Facebook but completely flop on Twitter. The audience is different on each platform, so you need to tailor your tags to the platforms.

The amount of tags to use on each platform also differs. Only one or two hashtags in a Facebook post is good; they’re not quite as popular on Facebook as they are on other platforms. In some cases, Facebook posts with no hashtags have done better than posts with them.

A tweet with only one or two hashtags has 21 percent higher engagement than a post with three or more. If there are more than two tags on a tweet, it can have a 17 percent drop in engagement. But if your tweet has one or two tags, it has twice the amount of engagement as one without tags.

When it comes to creating your hashtag, it needs to be unique and concise. Make sure you capitalize each word of the tag, to ensure it’s read correctly. For example, Susan Boyle, the runner-up for Britain’s Got Talent in 2009, didn’t make each word capitalized, so #SusanAlbumParty was instead “#susanalbumparty,” which was read wrong by many people. It was later changed, but not before the mistaken tag took on a life of its own. This is a good example of paying attention to exactly what your tag is before using it. Think like a 12-year-old when you proofread your hashtags; do you think a group of 12-year-olds would launch into a fit of giggles when reading it? Then you should change it accordingly. Try having someone not on your team read your tags before sending them out, too. This will help you avoid fumbling on your tag.

Another good example of something being misread because each word wasn’t capitalized is when Margaret Thatcher died, one of the hashtags created about it was #nowthatchersdead. Many people read it as #NowThatChersDead, leading to a flurry of tweets mourning the singer. Something can go viral for the wrong reasons, and then you’re stuck with the error.

Limit your tag to just a couple words, if it’s several words long, it’s not going to catch on as easily as something short and snappy. Try to avoid including strong emotions in your tags, like “love.” Using a less strong synonym can help your tweet do better than if you use a strong emotion.

Some companies use slogans or a call to action as a hashtag, which is a good way to help your tags take off. For example, the ALS Association became trending when the #IceBucketChallenge tag came out. It was shared by people all over the world, bringing new attention to ALS.

You can also use hashtags relevant to your industry, a realtor, for example, could use #RealEstate or #Realtor in a post. For these kinds of hashtags, it’s a good idea to search Twitter’s existing hashtags first, to make sure you don’t use one that doesn’t get used often enough to make a difference for your company.

Adding #random #hashtags to your sentences can be #annoying and #clutter up your posts. It’s a good idea to avoid doing this. Hashtags should be at the end of your post instead of throughout it.

Whether we like it or not, hashtags have become a key part of social media marketing. So, it’s important to learn how to make the most of them to boost your online presence.

While it doesn’t always seem like it when you’re perusing Twitter, hashtags are supposed to be a way for unconnected comments to share a common element, which allows people to connect and talk about the same thing together.